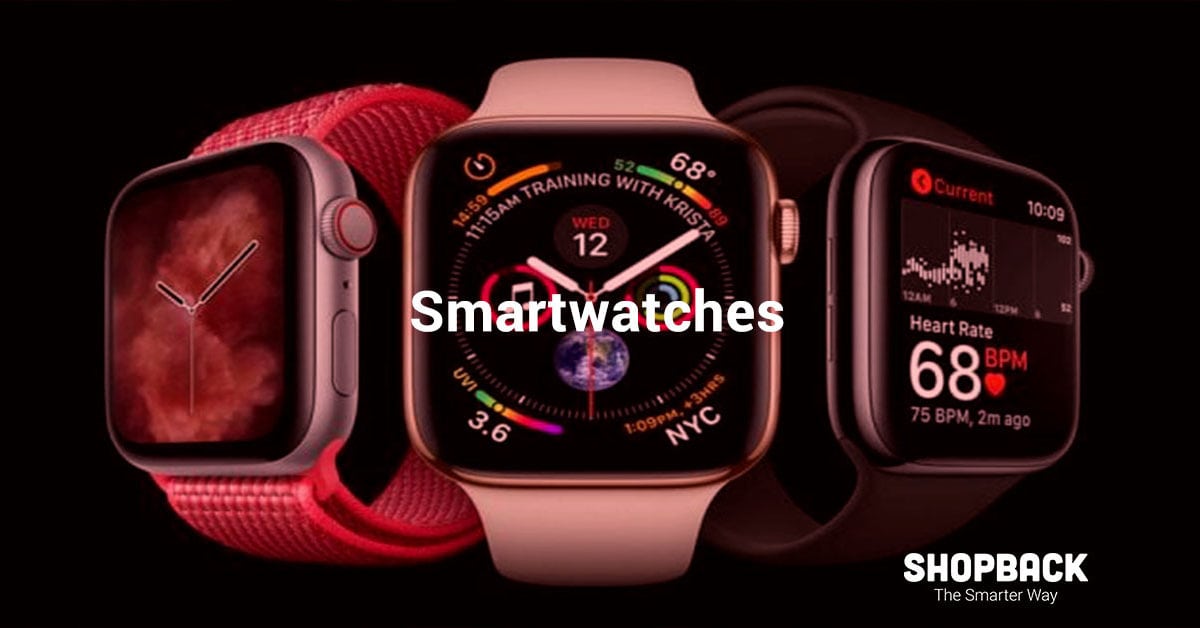 When you think about wearable technology, the first thing that comes to mind is probably a smartwatch. So what’s the function of a smartwatch? Is it a device that replaces your smartphone completely? Or is it a fitness tracker, with basic app functions, that also gives you notifications?

More importantly, there are so many smartwatches out in the market, but unless you’re really into tech or just really like to count (your steps) like this guy:

You’re not going to feel like you need a smartwatch in your life… Until now that is.

What if we told you that smartwatches today:

And yes, all of these functions point to the new Apple Watch Series 4. So should you buy the latest Apple (up to 3% upsized cashback) watch from Cupertino? Our short answer is: yes, only if you have deep pockets. But if you’d like equally reputable but more pocket-friendly options apart from what is probably going to be on everyone’s wrist, then read on…

Oh, and for our readers who know about ShopFest, stick around to find out how to get access to an exclusive Treasure Chest key!

Wearable Technology For Everyday Use

There was a time when wearable technology was not as sleek or attractive as the smartwatches and fitness trackers of today. Presenting evidence #1: the 2003 Garmin Forerunner 201.

Yep, it looks like something out of Power Rangers Turbo.

(Writer’s note: I might have revealed my age with this reference…)

Fast-forwarding to 2018, we’ve selected 4 smartwatches that offer (in our humble opinion) what we feel are the best features that wearable technology has to offer today. These 4 were selected because they can be worn for everyday use and will easily take you from the boardroom or cafe to the running track or swimming pool. We also curated them based on reviews from tech forums as well as our own colleagues here at ShopBack – which yielded one little-known but really premium looking smartwatch brand. Here are our candidates:

It is admittedly pricey for a small piece of wearable technology, but to put it into perspective, the Apple Watch occupies a very interesting space in the tech world right now as it is moving beyond just being a notifications device and fitness tracker.

The built-in EKG scanner is the headliner of the Series 4, and it allows you to get an ECG reading by simply placing your finger on the digital crown.

Another health feature is what can be described as “fall detection“. If you slip and fall (detected by the built-in accelerometer and gyroscope), a notification will appear on the watch face where you can either tap to indicate that you’re okay. Or you can tap an emergency button to solicit assistance.

If you haven’t responded within a minute – maybe you hit your head and passed out – the watch will automatically call emergency services and send a notification of your location to your preset emergency contacts. How. Cool. Is. That.

The one gripe about the Series 4 is that its battery life is expected to be similar to the Series 3. This translates to approximately 18 hours of use. And if you extrapolate that expectation to real life usage (assuming you take the Series 4 LTE version outside for a run with Apple music playing and GPS tracking on), your watch might not even last till lunch.

Fitbit Versa is evidence that the company has progressed beyond making really good fitness trackers to create a really good smartwatch that is an affordable Apple alternative ($318) – available on Lazada (up to 2% cashback).

The device weighs a mere 38g and looks compact and fashionable. Overall, it definitely feels lighter on the wrist as compared to the smallest Apple watch (40mm). It functions exactly as a fitness tracker should and even has a Fitbit Coach that allows you to watch workout videos. Swimmers rejoice as the Fitbit Versa is also fully water-resistant! For ladies, there is a dedicated female health tracking function that helps you to track your menstrual cycles.

Notifications are prompt and although you can’t reply to messages, you CAN do quick responses if you have an Android phone connected (sorry Apple users).

The Versa has an impressive 4-day battery life, which is well above that of the Apple Series 4. This also means that you can wear it to sleep to track your sleep stages, instead of having to leave it next to your bed while it charges overnight.

There are a few limitations:

And if you’re thinking of maximising the use of your Spotify premium account on your Versa, you’re out of luck as you can only choose from Pandora or Deezer.

The Samsung Galaxy Watch (46mm silver variant) may share the Fitbit Versa’s phenomenal 4-day battery life, but it packs a lot more features and can potentially rival the Apple Watch Series 4. It costs a little more than the Versa but it’s definitely more affordable ($399) than Apple’s offering – available for pre-order on Qoo10 (up to 2% cashback).

Want to take it for a swim? The 63g device (without straps) is swim-proof up to 50m depth. And that’s impressive considering that the LTE variant has an integrated microphone and speaker for taking calls.

We like the rotating bezel as it allows users to navigate Tizen OS intuitively. As compared to Apple’s watchOS which uses a digital crown on the side instead. It’s also extremely useful for sweaty or wet hands, that won’t work as well on a touchscreen post workout.

Android fans will be disappointed to learn that the Samsung Galaxy Watch does not come with Google’s Wear OS, and it’s probably because:

The lack of Wear OS also means that the only smart assistant you have is Bixby… Which some might feel is the Microsoft equivalent of this:

TicWatch Pro is probably the best smartwatch you’ve never heard of and is the latest premium offering from Mobvoi, a tech company that was formed by ex-Googlers. It’s also cheaper ($379 on Qoo10) than the Apple Watch Series 4 and Samsung Galaxy Watch while offering almost everything that the two can do.

The TicWatch Pro’s unique selling point is its revolutionary dual-layer screen. So instead of staring at nothing when the OLED screen is off – like in traditional smartwatches – you’ll get a familiar LCD display (with basic information like date and time) that wouldn’t look out of place on a Seiko timepiece.

So why two displays? Basically, it overcomes the problem of limited battery life by allowing you to use the watch in 3 modes:

Android fans will be pleased to note that the watch runs on Wear OS, which gives you access to Google Assistant as well as apps like Google Fit, Google Maps, Google Pay, and etc.

We did learn, however, from a colleague’s personal experience that you might experience periodic Bluetooth disconnection from your smartphone. But we’re pretty sure that it’ll be fixed in time with updates to Wear OS.

Sizing Up All 4 Smartwatches

Here’s an overview of all 4 smartwatches:

There isn’t a clear winner when it comes to buying a piece of wearable technology as we’re all limited by budget as well as what each smartwatch has to offer. But it’s clear that these devices exist to make our lives easier and will help us in our push towards becoming a Smarter Nation.

And hey, Christmas is just around the corner so if you need to pick up a gift for someone special (like yourself)…

Here’s a gentle reminder that tech and gadgets ALWAYS go for massively discounted prices during Black Friday and Cyber Monday. And we’re not too far away from both… #justsaying

If You’re Already Planning To Buy A Smartwatch…

Then why not check out our ShopFest page for more information about the next sales event as well as how to win prizes like a 3D2N stay at Labuan Bajo, Plataran Komodo Beach Resort + $1000 cashback, or a Microsoft Surface Go Bundle worth $1,218, and more!

Pro tip: For even more chances to earn points and unlock levels, check ShopBack’s Facebook page and daily newsletters during key dates, in order to find special keys to unlock Treasure Chests via the ShopBack App! Which smartwatch will you be getting? Let us know in the comments below!

If you enjoyed reading our take on technology, follow us on our Telegram channel!

(P.S. We’ll be releasing a special Treasure Chest key for our readers there.)