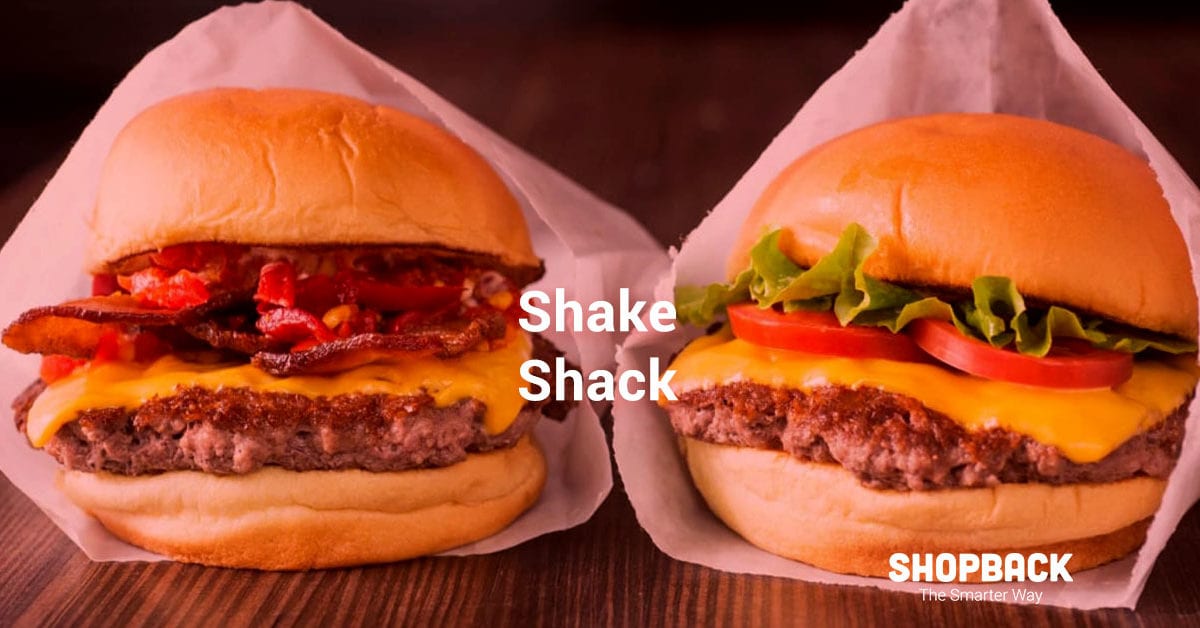 No prizes for guessing, but yes, come 2019, Shake Shack is opening an outlet here in Jewel Changi Airport!

For the uninformed, you might be going, “Aiya… Another burger place? Big deal… A&W is coming back to Singapore leh.” Well… As much as we miss our curly fries, Coney Cheese Dogs, and root beer floats. Shake Shack will always have a special place in the hearts of those who have visited the Big Apple and tried the delightful offerings at this quintessential New York institution.

So what’s the big deal with this burger chain and what can we expect? We give you the low-down on how Shake Shack will shake up the local fast food scene and talk about what we hope to see when it finally opens here in 2019.

And if you like to be kept in the loop with regard to news that’s shaking up Singapore, be sure to follow us on our Telegram channel!

So What’s The Big Deal With Shake Shack?

Shake Shack first started out as a hot dog cart in Madison Square Park, in Manhattan to support the Madison Square Park Conservancy’s first art installation. The cart enjoyed great success over three summers spanning 2001 to 2003. In 2004, a permanent burger kiosk was set up and the menu was expanded to include burgers, frozen custards, shakes, beer, wine, and more.

So why is it so popular? It’s probably because they managed to combine the use of fresh, high quality produce with relatively affordable prices (disclaimer: a ShackBurger’s definitely going to cost more than a Big Mac). In order to create fast food that tastes good and is nutritionally sound. Well, as good as it can possibly be. We’re not going to say that a burger is HEALTHIER than a salad…

It also helps that visiting Shake Shack at Madison Square Park has the same convenience as us visiting our neighbourhood McDonald’s. Only it’s in a park where the surroundings look like you’re on the set of Disney’s Enchanted.

(Writer’s note: You’ll know when he shows up at your door with ShackBurgers, fries, and concretes.)

TL;DR Besides becoming part of New York’s social and cultural fabric. Many tourists who tried a ShackBurger fell in love immediately. In response, Danny Meyer (founder of Shake Shack) decided to open one in Tokyo’s Gaien Park in 2015. Since then, it has expanded to include more Shacks in Japan, South Korea, and Hong Kong. And finally in 2019, one here on our sunny island.

So… What Do We Know About Shake Shack Singapore?

Nothing yet. Less the fact that it’s opening in 2019 in Jewel Changi Airport.

However, we do know that Shake Shack’s mission is to Stand For Something Good, which will probably see the chain work with local suppliers and producers to perhaps create some signature items that are unique to Singapore. The menu will, of course, feature Shake Shack’s signature items like the ShackBurger, the Shack-cago Dog, their classic crinkle-cut fries, and frozen custard ice cream creations.

What To Expect At Shake Shack Singapore

If you’re unfamiliar with Shake Shack’s menu, here’s a breakdown of what to expect. For Shack fans, we’ve included plenty of pictures to drool over while we wait for Shake Shack Singapore to open…

The reason why ShackBurgers taste so good is probably because they insist on using 100% all-natural Angus beef with no hormones and antibiotics. The freshly ground blend is shaped into thick pucks and the patties are cooked with a tool that looks like a paint scraper.

The technique? Flattened once into the griddle to get an even sear which browns and gives the burger its flavour (Writer’s note: the science people call this the Maillard reaction). All while keeping the burger juicy and moist.

Leave it to cook to a perfect medium (the default done-ness unless you specify during your order) before scraping it off and flipping it once. A slice of American cheese is added to create a gooey blanket on top of the patty. Add lettuce, thick slices of tomatoes, pickles or onions, with their proprietary ShackSauce, served in a butter toasted non-GMO Martin’s Potato Roll and you have a classic ShackBurger.

If you’re a vegetarian, Shake Shack has a ‘Shroom Burger that is a crisp-fried portobello mushroom filled with muenster and cheddar cheeses, topped with lettuce, tomato, and… You guessed it, ShackSauce. (Writer’s note: I’m not a huge veggie burger fan, but the combination of molten cheese with that thick, juicy portobello… Mmmhmm!)

Can’t decide between the two? Go for the Shack Stack which is a ShackBurger stacked with a ‘Shroom Burger.

We’ve established that Shake Shack makes really awesome burgers, but their Shack-cago Dog shouldn’t be slept on either. The hot dogs are 100% all-natural Vienna beef with no hormones and antibiotics. They’re split down the middle to achieve a perfect crisp when cooked. Before being dressed with Rick’s Picks Shack relish, cucumber, onion, pickle, tomato, and mustard.

For those looking for an alternative to beef, there’s even a Chicken Dog which is a chicken, apple, and sage sausage specially made for the Shack.

Their vanilla and chocolate recipes reportedly use only real sugar (no artificial sweeteners or corn syrup) and milk from dairy farmers who have pledged not to use artificial growth hormones to raise their livestock. Heck, even their chocolate fudge and caramel sauces have zero preservatives.

But most importantly, there are unique concretes that are specifically tailored and created for each Shack location.

Check out this Tokyo special made of vanilla custard, yuzu–miso caramel and matcha macaron, dusted with matcha and soybean powder:

So if they can come up with something this amazing, imagine the possibilities for a Singapore exclusive concrete…

What We Hope To See At Shake Shack Singapore

You’re probably wondering: why the fuss over the Shake Shack Breakfast Menu?

Firstly, keeping in line with its mission to Stand For Something Good, the Shack’s breakfast options are pretty darn good (both in taste and with regard to health).

The Sausage, Egg N’Cheese consists of a griddled cage-free egg topped with all-natural pork sausage and American cheese, served in the same pillowy soft potato roll that they use for their ShackBurgers. Think of it as the atas cousin of the Egg McMuffin.

And what could be a better accompaniment than a cup of coffee made from a custom Stumptown Shack blend of organic, direct trade (read: quality) beans?

Secondly, the breakfast menu is exclusively available at select locations:

Which is why we would really, REALLY like to see the breakfast menu being made available in Singapore too. And c’mon, have you seen what Jewel Changi Airport is going to look like?

Why wouldn’t you want to serve the perfect breakfast to millions of visitors who would definitely stop and linger in this gorgeous air-conditioned indoor garden?

We know that “Shake Shack’s dog menu is available at all Shake Shacks except stadiums, ballparks, airports and international outposts”. But hey, wouldn’t it be nice if dog-lovers could come back from a holiday and get something special for their furry four-legged friends?

We would totally understand if the Pooch-ini (ShackBurger dog biscuits with vanilla custard) is not an ideal option as it would probably melt before we make it back home. Unless they somehow allow dogs in Jewel Changi Airport…

But hey, at least let us take back a Bag O’Bones (5 ShackBurger dog biscuits) to surprise our canine counterparts who have been waiting ever so patiently for us to return from that long vacation.

Now that we’ve got your attention… Yes, that’s NOT CLICKBAIT. We’re really offering you Yolé yoghurt for less than half price! 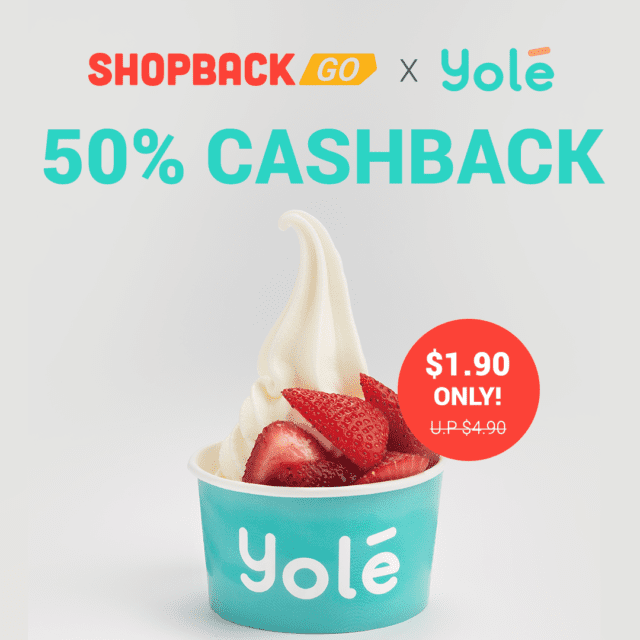 Where you ask? At our ShopFest Showcase of course! And it’s happening from 19 to 21 October (11am to 9pm daily) at [email protected] Level 1 Atrium. 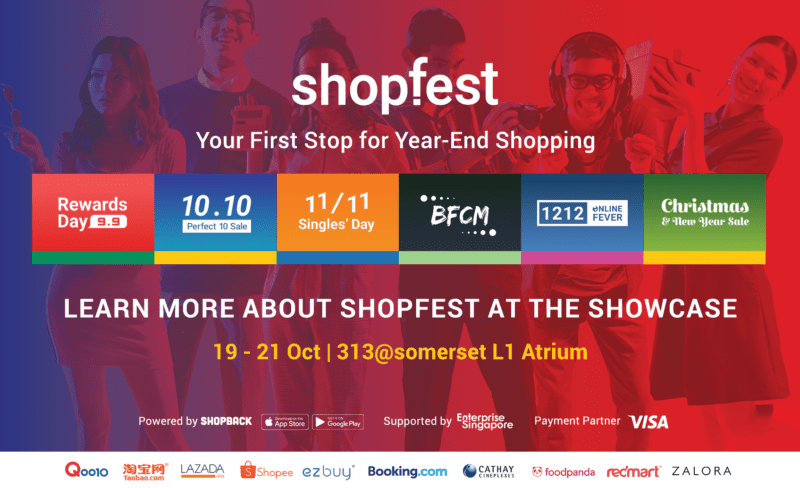 And why are we doing this? Well… We just want to spread the word that ShopFest is THE year-end shopping festival in Singapore that headlines 6 major shopping events designed to delight shoppers with diverse needs and wants. And ShopFest is a one-stop portal that helps shoppers find out who, what, where, when, why, and how to shop The Smarter Way and get the most out of this year-end sales period (1 September 2018 to 3 January 2019).

We also want to share more about… ShopBack GO! It’s ShopBack’s new feature that allows you to earn cashback in-stores! 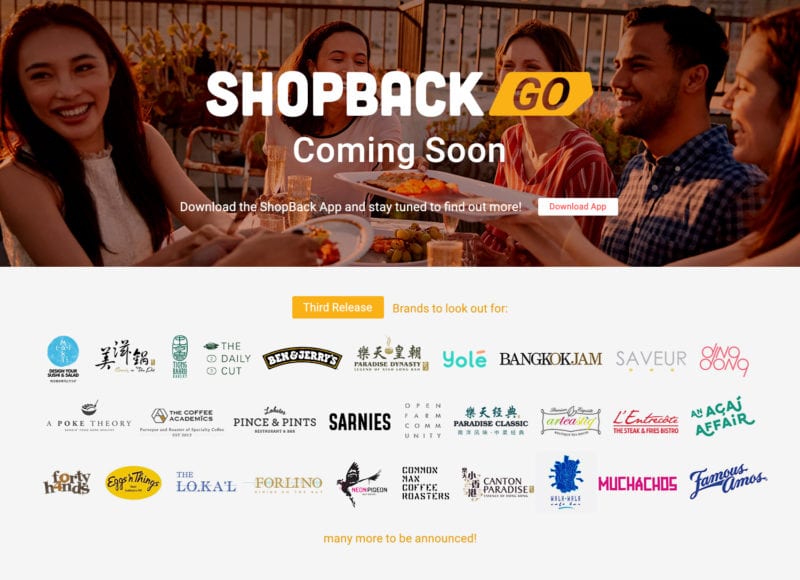 What’s more, there are plenty of sure-win prizes and hourly giveaways that you can stand to win like:

And if Yolé yoghurt and wicked prizes aren’t enough to tempt you to come down and join us at the ShopFest Showcase? Here’s a little insider info: The first 500 who flash their Facebook RSVP at the ShopFest redemption booth will be entitled to a limited mystery tote bag! See you at the event!

What are you most looking forward to at Shake Shack? What kind of concrete flavours do you think the Shack’ll come up with? Let us know in the comments below!