Best Time to Travel in Southeast Asia (And Avoid the Monsoons) 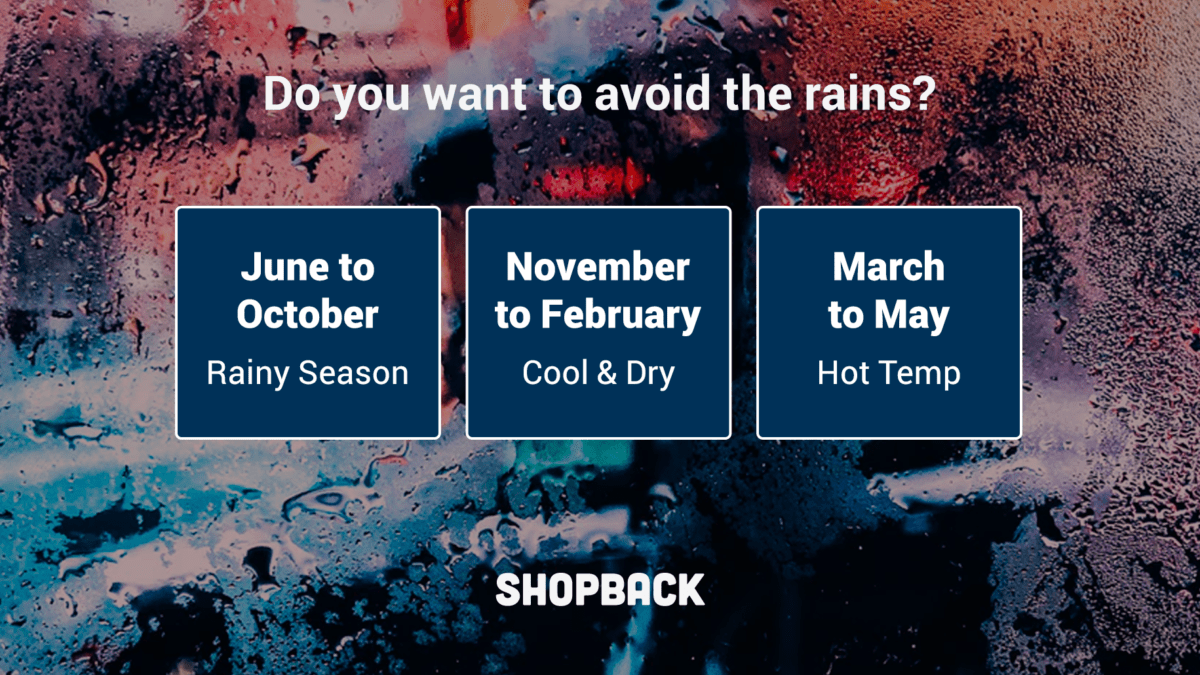 Here is the perfect scenario for you vacay: sunny weather, no chances of rain, not too hot, not too cold… It is hard to tell what kind of weather you will get nowadays (climate change is real!). But with the right amount of planning, you can avoid booking an island resort and be confined to the hotel room due to constant rains.

The best time to book your dream trip is now! From 20 to 28 Feb, get up to 25% Cashback when you book your trips with ShopBack. Be the first to know about the latest blog posts and travel deals by following our Telegram channel.

Here is the rainy season calendar for the top destinations in Asia:

Countries by the season

“Seasons, what seasons?”, You may ask. In our little tropical paradise called Singapore, weather is uniformly humid and hot so we don’t experience extreme climate changes. For other Southeast Asian countries, that is not so.

Note: The information used above was sourced based on historical weather patterns. Considering the extreme climate changes, the seasons’ patterns might also change overtime.

When planning a trip to Malaysia consider where you intend to go: Peninsular Malaysia? East or West coast? Are you going to East Malaysia? The climate varies a lot depending on your destination.

Indonesia is so vast that the weather will vary a lot from region to region and island to island. As a rule of thumb, know that the rainy season happens from October to March.

In Thailand there are mainly three seasons:

The weather changes as you go from North to South so you might find cooler, wetter weather in Chiang Mai while it is sunny and dry in Krabi.

The weather is also #morefuninthephilippines except during typhoon season that usually occurs between August to October, flooding cities and disturbing flights. Actually, the Philippines has two different monsoon seasons:

In eclectic Vietnam, the rainy season arrives from May to November in Ho Chi Minh City, and from May to September in Hanoi.

In Cambodia, the rainy season occurs from June to November, with particularly heavy rain in September and October. We aren’t in any way advising not to travel there during this period. Actually, Angkor Wat looks beautiful during the rainy season: the jungles become greener and lusher, and the water pools reflect the temples nicely making for great photo opportunities.

If you are looking to visit Laos while it is hot and sunny, go during the dry season, from October to April.

In BurmaMyanmar, rainy season happens from May to October. If you intend to visit, pack a raincoat and keep your schedule flexible.

Monsoon happens from May to October in the Maldives. If your plan is to enjoy the sea and book yourself on a luxury water villa, schedule a trip for December to march instead.

Tips to travel during Monsoons

Should you travel during monsoons?

The answer is, yes, you may. If your objective is to laze around on a beach, stay clear and avoid travelling during those periods. If you find that the weather is not that extreme that will disrupt your travel plans, travelling during rainy seasons often comes out to be cheaper. There is so much to experience in the destinations above. Rain is only a temporary nuisance.

For more travel promotions and inspiration, don’t forget to bookmark our travel deals page at ShopBack.

Marta is a content crafter at ShopBack. She reads in her free time and spends her money on travel and frozen yoghurt. She will also exchange travel advice for free coffee.