Pokemon Let’s Go: Eevee Or Pikachu, Which One Should You Choose? 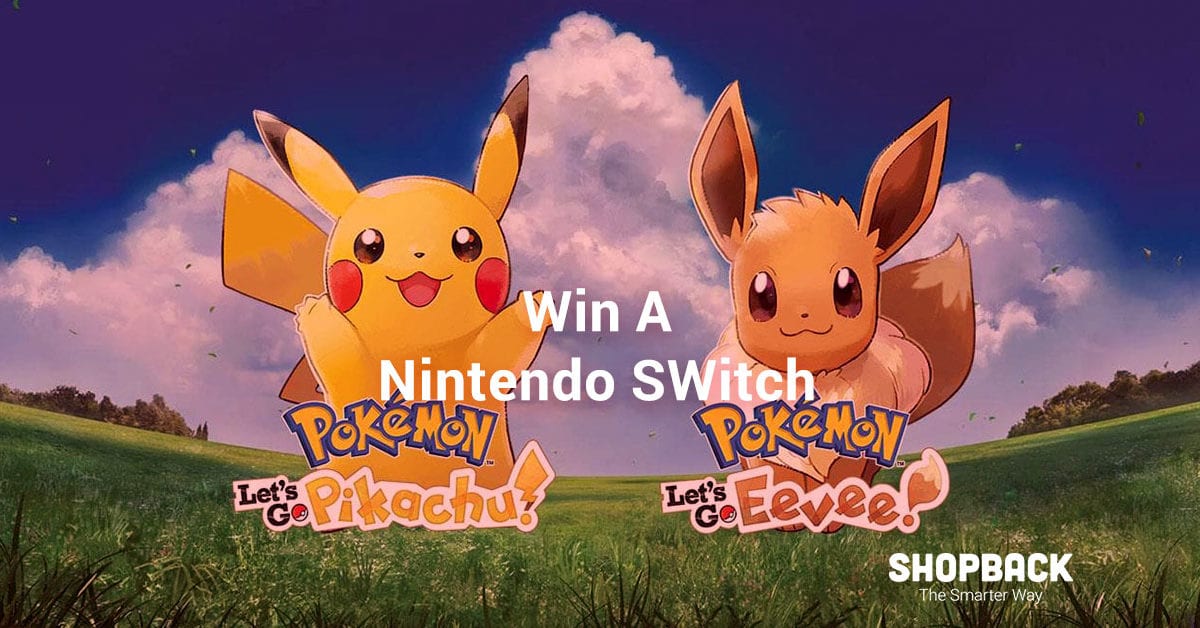 With Pokémon: Detective Pikachu, a live-action movie, and a Pokémon “core RPG” game for Nintendo Switch announced for 2019. It’s a great time to be a Poké-fan.

The game is essentially a remastered version of a beloved classic: the first generation Game Boy Pokémon RPG, Pokémon Yellow. However, the graphics and gameplay have been improved and elements of Pokémon GO have been included (and linked) to make it even more accessible to the casual player.

So which edition should you get? Should you partner with the adorable Eevee? Or should you pick the face of the Pokémon franchise, Pikachu, as your companion? We talk about what’s new in Pokémon: Let’s Go and help you make a decision. Oh, and if you’d like to find out how you can win a Nintendo Switch Pokémon: Let’s Go edition, read on!

Want to be the first to learn about the latest video games and what’s new in the world of Pokémon? Why not follow us on our Telegram channel? We also give out special TREASURE CHEST codes like this: BLGBFCM16, so stay tuned for more!

Besides being an updated, 3D version of Pokémon Yellow, here’s what we’re excited about in Pokémon: Let’s Go.

As Let’s Go is based on Pokémon Yellow, any mechanics from later Pokémon RPGs that newer Pokémon players are familiar with, will not be available. This means that:

Effectively, your overall gameplay should be as close to what first generation Pokémon gamers experienced. However, there are some changes like…

The introduction of Secret Techniques, where your partner Pokémon will be able to learn skills that can be used outside of battle. Instead of needing Pokémon on your team who can learn HM techniques like Cut, Surf, or Fly, your Eevee or Pikachu can learn Chop Down, Sea Skim, and Sky Dash respectively.

Eevee’s Sky Dash is particularly endearing as your partner will commandeer a harness with six balloons, as you travel from city to city, like so:

Instead of battling a wild Pokémon and whittling its health down so that it’s weak enough to be captured by a Pokéball, the catching Pokémon is now similar to Pokémon GO. You throw berries to increase your chance of capturing it, then you throw a Pokéball via a flick on the Switch’s touchscreen or your Joy-Con controller.

Note: this does not apply to the capture of the legendary birds, Articuno, Zapdos, and Moltres.

Encounters with wild Pokémon will no longer be random as you can see what Pokémon are lurking in the tall grass.

This is a welcomed improvement because you can now stroll through Mt. Moon without having to fight EVERY damn Geodude and Zubat as you pray to Arceus (or Mew, considering that it’s considered to be the ancestor of all Pokémon) that you don’t run out of PP.

Also, there’s no such thing as GameShark. So the only way you can get Mew is to purchase the Poké Ball Plus.

The Poké Ball Plus works like a Nintendo Switch Joy-Con controller so you can use it to move, navigate, battle, and catch Pokémon by moving the device like you’re throwing it. Just don’t actually throw it at your screen.

FYI: The Pokémon Company has said that they won’t sell the Poké Ball Plus accessory forever, so if you want Mew, it’s a good idea to get it sooner then later.

Gen 1 players will be pleased to note that all original 151 Kanto Pokémon species will be available for you to catch ’em all. However, to keep it slightly interesting, you’ll also encounter their Mega Evolutions from Pokémon X and Y, Alpha Sapphire, and Omega Ruby. For the uninitiated, have a look at Charizard’s Mega Evolutions, Mega Charizard X (the badass Charizard with wings on its arms) and Y (the one that’s black and blue):

There’ll also be one new Pokémon that will be introduced to players of Let’s Go. Introducing… Meltan:

Which evolves into this intimidating-looking Melmetal:

Also, here’s a bit of good news for Pokémon GO players: you can transfer your Pokémon over to Let’s Go! However, there’re a few things you should keep in mind:

You can style your partner Pokémon with clothes and accessories that you’ll receive from various NPCs all over Kanto. By playing in handheld mode, you can also give your partner various hairstyles by stroking the screen in various ways to ruffle up your Pokémon’s fur in different ways.

Need some help capturing a Pokémon, or have a younger sibling who would like to join in the fun? You can share your Pokémon adventure by using another Joy-Con controller or Poké Ball Plus accessory to catch and battle alongside another player.

This 2-player co-op introduces a second player (of the opposite gender) who will share the same team of Pokémon that you have. This makes battles even easier because most fights against NPCs will be a 2 on 1 affair. When catching wild Pokémon, players will get a catch bonus if they manage to throw their Pokéballs at the same time – potentially increasing the odds of successfully catching the Pokémon.

There’re just too many features to talk about so we’ll leave some for you to find out for yourself when you grab a copy of the game.

Let’s Go, Eevee or Let’s Go, Pikachu: Which One Should You Choose?

Is one version really better than the other? We list out the differences to help you make a decision.

Those familiar with the franchise will know that every release of a new Pokémon RPG comes in two editions. And the biggest difference between both editions is the type of Pokémon you can catch. With Let’s Go, the same rules apply. Those exclusive to Let’s Go, Pikachu! include:

While players in Let’s Go, Eevee! will encounter:

Poké-fans’ll also notice that we left out Arcanine and Persian (their pre-evolutions are Growlithe and Meowth respectively), as they can be obtained via in-game trading or other means (Pro tip: for Let’s Go, Eevee! players, look for a lady, sitting on a bench in the middle of Vermilion City, who asks trainers to show her five Meowths. Satisfy her feline obsession and she’ll gift you an Arcanine.).

And if you’re wondering if it’ll be worth getting the fiery canine, just take a look at how cool you’ll look riding your own Arcanine around Kanto:

(Writer’s note: Personally, I like Vulpix and Ninetales. And have you seen Alolan Vulpix?)

As you travel through Kanto, you’ll meet move tutors in the various Pokémon Centers. Yep, it’s the character dressed as a circus ringmaster:

These NPCs will teach your partner Pokémon, exclusive partner attacks. These attacks generally have a high attack power, unique secondary effects, and introduces element moves not usually available to the Pokémon in question eg. Pikachu will be able to learn a water type move. Also, expanding your partner’s elemental moveset is critical because your partner Pokémon will not be able to evolve. Meaning your partner Eevee cannot take on any of its Eeveelutions, so this is the only way it’ll learn an elemental attack.

Pikachu has a handful of exclusive attacks available, namely:

While Eevee is able to learn attacks based on its potential Eeveelutions:

Overall, it looks like Eevee has a more varied and interesting partner exclusive move lineup than Pikachu.

Playing either edition doesn’t mean that you won’t be able to get Pikachu, and vice versa. It’s just that Let’s Go, Eevee players can catch wild Pikachus as early as Viridian City.

Fans of the O.G. Game Boy games will remember that Eevee cannot be caught in the wild and the only way to get one is in a mansion in Celadon City. And that’s pretty late into the game…

Wild Eevee can be found on Route 17 and they’re a relatively common spawn. But in order to reach Route 17, you need to:

Only then can you access Route 17. It’ll take you a while to be able to catch a wild Eevee, but you’ll definitely get one, or more – depending on how much you love Eevees. Alternatively, trade for one with someone else, or transfer one over from Pokémon Go.

So if you absolutely need to field your team with an Eevee from the beginning, you now know which edition to get.

I Choose You! Er…

It’s hard to shout decisively as Ash does when it comes to choosing an edition to play. (Writer’s note: If you can’t already tell, I’m slightly biased towards Let’s Go, Eevee!)

Whichever edition you choose, Pokémon: Let’s Go promises to be a great trip down memory lane for players whose first Pokémon adventure started with the original 151 critters. It’s also a good bridge for new players who wish to experience the magic of the original Pokémon RPG, updated with elements from games that they’re currently playing.

All you have to do is spend more than $300 at either one or more merchants listed above. Meaning if you spend a total of $305 on AliExpress and Qoo10, you qualify for a chance to win the Nintendo Switch prize. Here’s what it looks like in the dock:

Here’s the back of the Switch:

And here’re the controllers (you can see that one is Eevee themed, and the other is in Pikachu’s colours):

It’ll probably be easy to hit this amount because there are just so many deals and discounts available during this Black Friday Cyber Monday sales. And if you’re already buying the bundle or are treating yourself to a much deserved year-end holiday, your purchases just might qualify you to win other prizes like an Apple iPad Pro or a Rimowa Original Check In M luggage.

Which Pokémon Let’s Go edition are you planning to get? Let us know in the comments below!