Home > Food > Insane Pizza Marathon: Stuff Yourself With These 7 Pizzas And More In Singapore 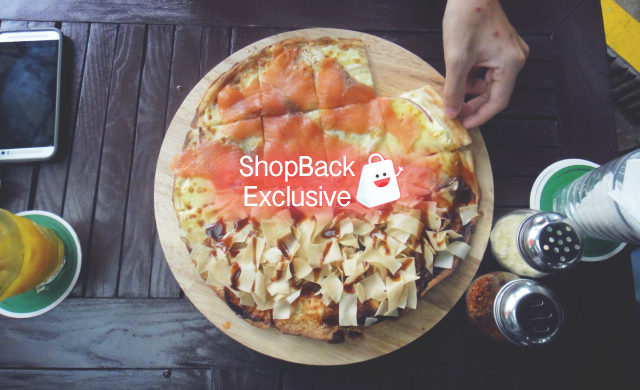 Insane Pizza Marathon: Stuff Yourself With These 7 Pizzas And More In Singapore

It’s the perfect food when you want to jio friends for a meal.

Even better, you can have it any time, any day. 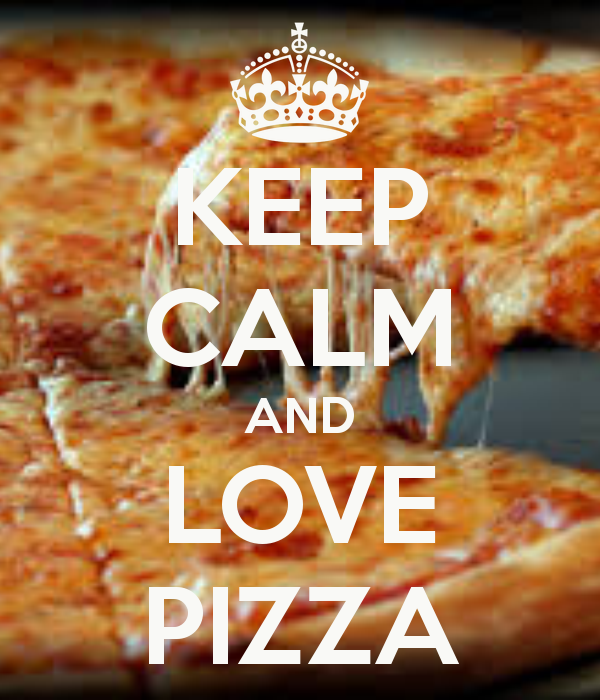 We at ShopBack are always on the lookout for the best deals, even when it comes to food! But with so many pizzas to choose from and so many restaurants to try, there’s only one way to know for sure.

A pizza marathon –  7 pizzas in a day, no holds barred. And Mamma mia, did all of them hit the spot!

From atas to casual, we bring you our exclusive review of some of the best pizzas in town. By the way, meet the pizza experts, Tom (left) and me (right)! 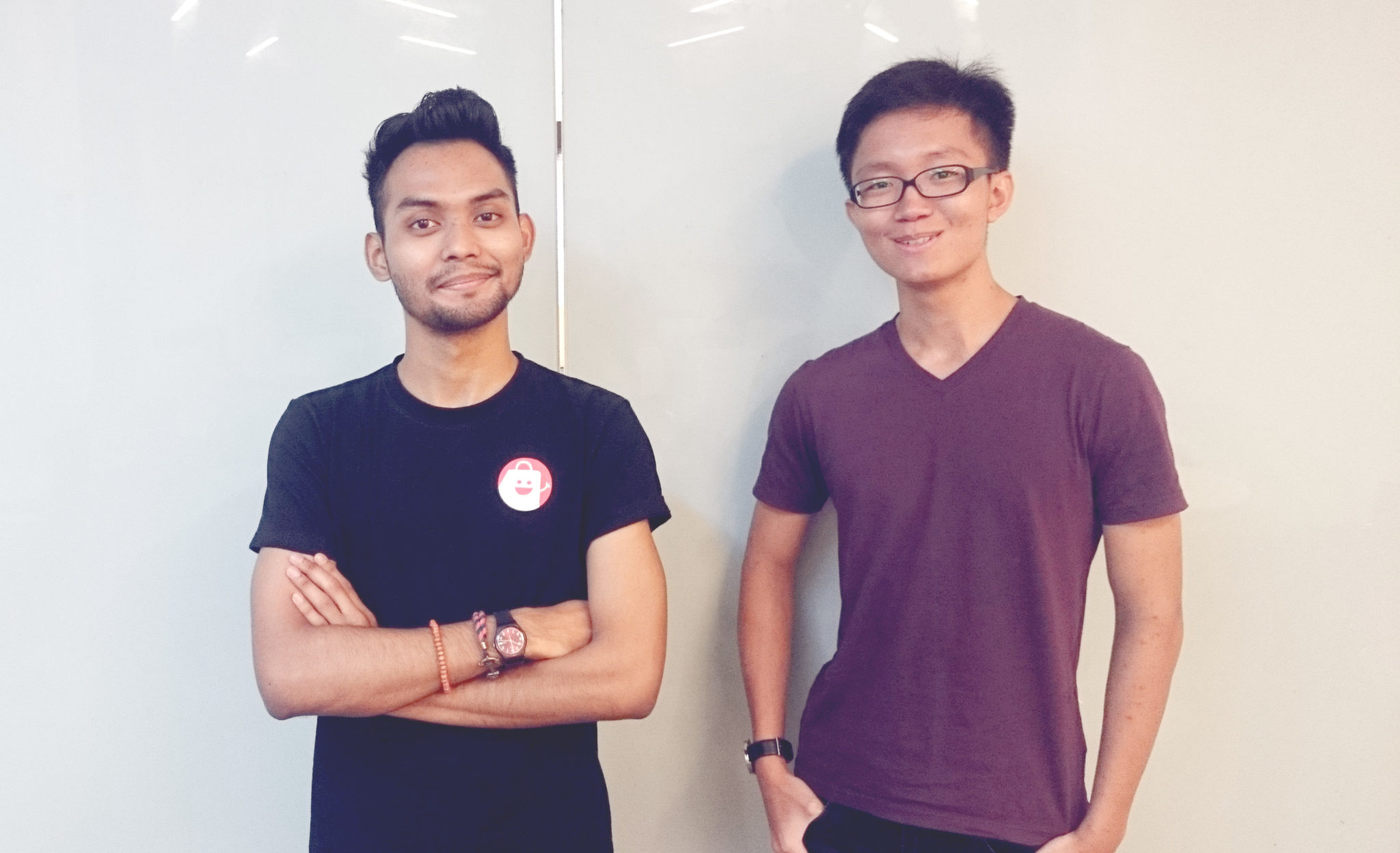 Anybody who has been to [email protected] will definitely know of this casual diner. Formerly known as Trattoria Cuccina Italiana, Trattoria Italian Kitchen is conveniently situated directly in front of Somerset MRT exit B.  Italian decor and a menu of Italian-named dishes adds to the authenticity, but the crowds of passers-by, divided only by sparsely placed potted plants, does give the place a bit of a kopitiam feel with little privacy.

We wanted to try something special, and settled on Pizza Spicy Pollo, a hearty pizza topped with sliced roasted chicken breast and earthy mushrooms coated with a generous cheese and garnished with a dash of chilli flakes. 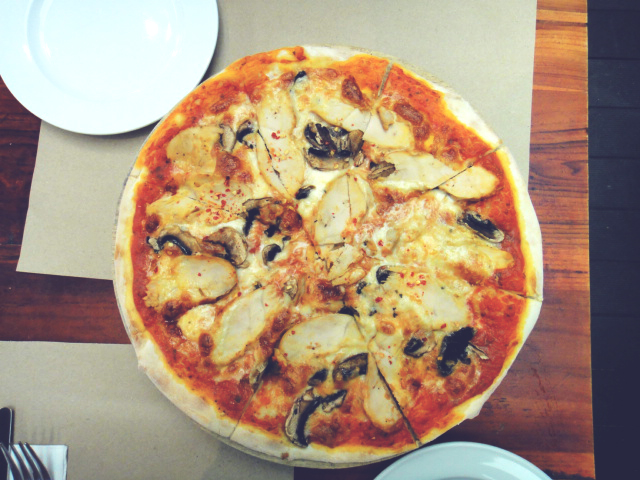 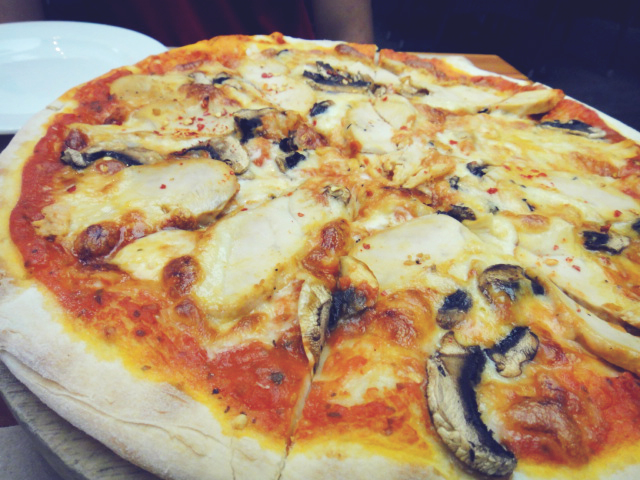 Tom and I are not big fans of chicken breast, but this oft-dry and tasteless portion tasted surprisingly succulent on this pizza! The mushrooms, fortunately, weren’t overdone, and retained a springy texture too. 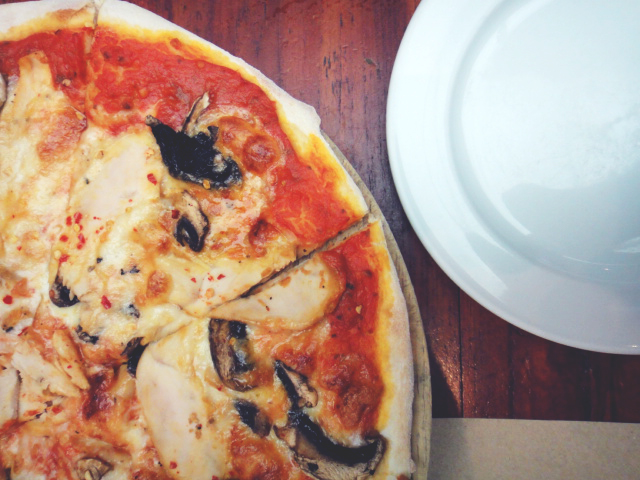 This image doesn’t quite do justice to the crisp, fragrant pizza crust. While adding the chilli flakes may seem like a cheap move akin to using MSG, this pizza really shined with the spicy zing – the moderate spiciness really made us crave for more! 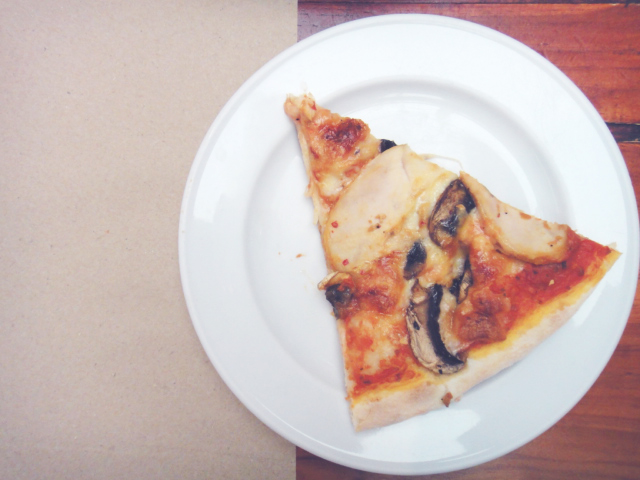 THE LAST SLICE after just 10 minutes. Tom and I basically wolfed down this 10-incher.

Although it’s relatively pricey at $25.90, this pizza definitely punches above its weight. Authentic italian ingredients prepared to perfection, and this was one of those rare moments where chicken breast actually tasted really good too! 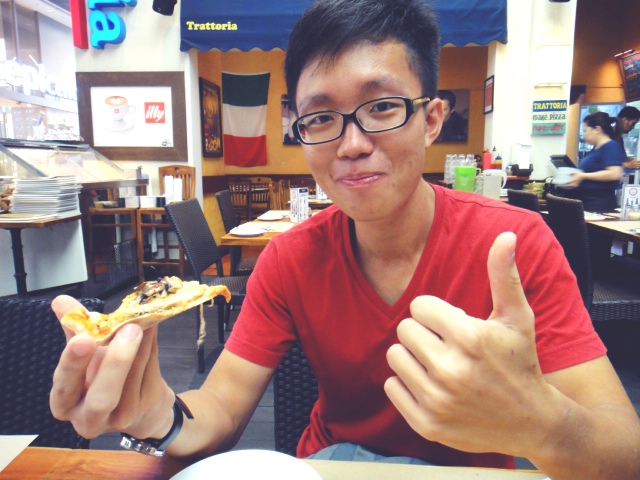 Our first impression of this pizza joint was “WOW DAMN ATAS” – from the internal decor to the clientele, the place had a sophisticated feel to it.  Even the level of service was refined –  staff who attended to us were really attentive and took great pains to ensure our comfort (one of the waiters even stood by the door and saw us out!) .

Spizza prides itself on offering authentic wood-fired pizzas to the discerning palates of Singaporeans, and we certainly felt they did! An even bigger plus? Spizza insists that its pizzas are only prepared upon order, so customers are guaranteed oven-fresh pizzas!

While Trattoria’s menu is chock-full of italian names that read like tongue twisters, Spizza’s pizzas are peculiarly named after girls. Fancy a Rebecca, Paula or Zara?

We initially planned to have just one pizza per restaurant, but Spizza was having a SAFRA members 2-for-1 special (it’s over already, unfortunately :() , so we ordered a Vittoria and had a Zara on the house! 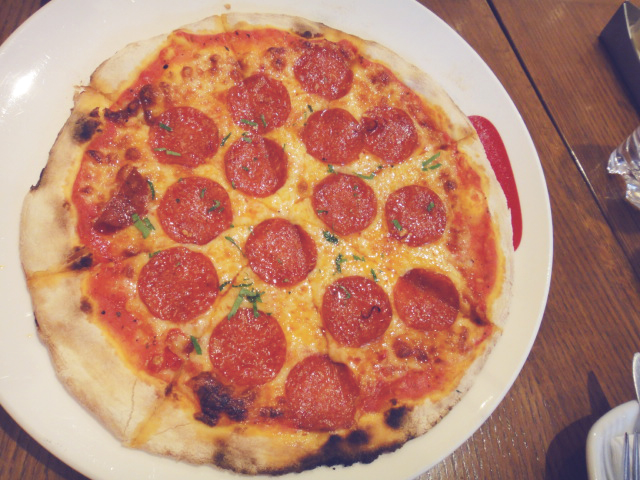 With rich, yellow melted cheese and oil oozing out from the generous salami topping, the Vittoria was practically glistening under the warm ambient light! Instead of chilli flakes, sliced chili padi are thrown into the mix to give this pizza and added kick!

We’re no pizza connoisseurs, but a crisp crust with a soft, chewy middle is a sure sign that this pizza is authentic wood-fired goodness! 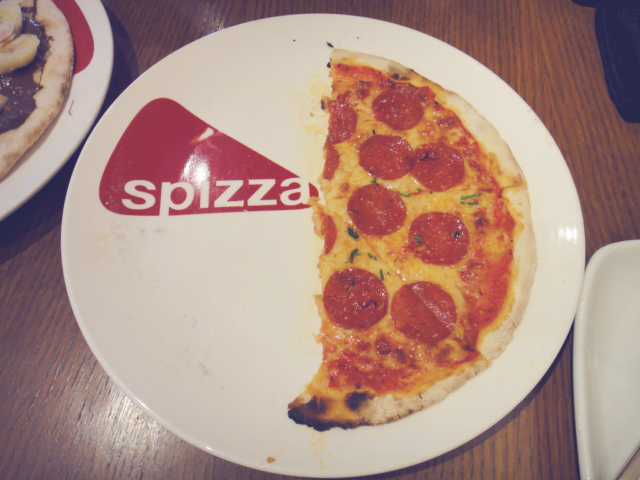 OMNOMNOMNOM. So mouthwateringly good we forgot to get creative with the plate. 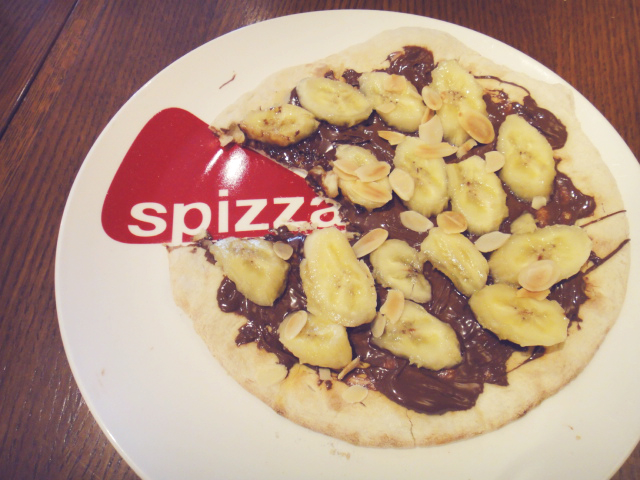 There! Unlike the Vittoria, the Zara is a sweet treat – it’s your standard crisp pizza crust made extra crispy, slathered with a generous dollop of nutella and topped with banana slices and sliced almonds.  Think nutella-flavored crepe, only better. Way better.

Anything with nutella tastes great, but this nutella & banana pizza from Spizza really hit the spot!

Absolutely! The atas feel of this pizzeria belies the affordability of its pizzas. The Vittoria set us back only $19, even though everything on it screamed authentic! Plus, they’ve got a nutella & banana flavored pizza for equally cheap. Enough said.

Address: Islandwide, but the branch we went to is situated at 29 club street.

Before you denounce this as sheer effrontery, Pastamania does have its fair share of savoury and sweet pizzas that are well worth a try. Besides, we are doing a pizza marathon, remember?

We’ve had our fair share of meat by now, so Tom and I decided to settle for a dessert pizza instead – the Crostata Di Litchi (it’s more of a tart than a pizza though but hey it works). 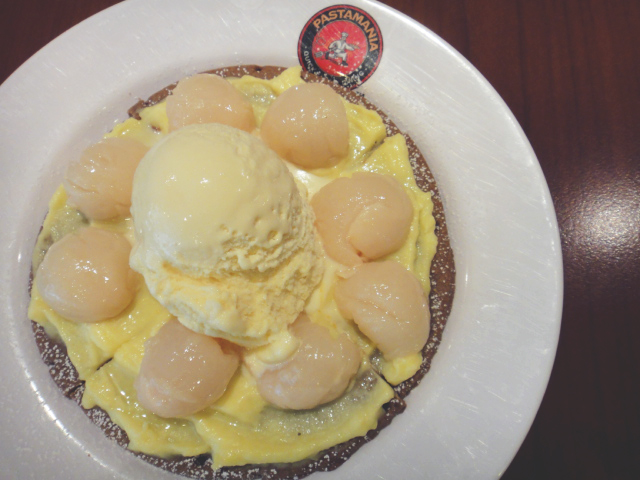 Turns out it wasn’t regular pizza crust! This dessert felt more like a giant cookie topped with creamy custard, fresh lychees and a scoop of vanilla gelato.

While the cookie was rather tasteless, everything else was just sweet paradise. Peculiarly, taking a bite of the cookie together with the vanilla gelato create a subtle gingerbread-like taste.

Not really… Besides the fact that we’re deliberately having pizza in Pastamania, $5.50 for this simple dessert just doesn’t cut it. While it’s a matter of personal taste, the lychees didn’t really go well with custard for me. 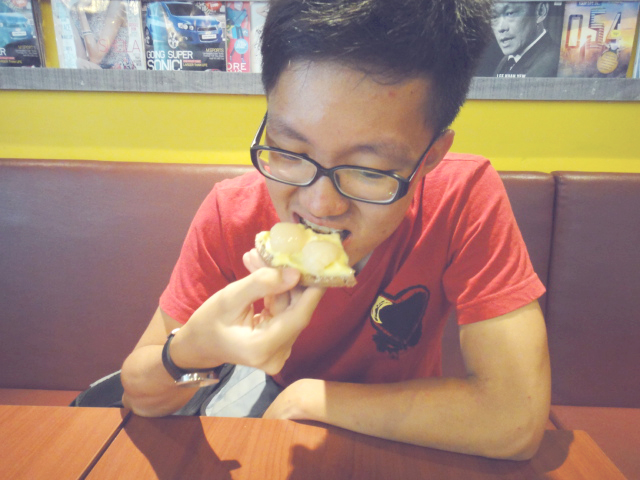 Address: Pastamania’s practically everywhere, guys. You don’t need us to tell you where to find one. If you insist in literally following our foodie steps, head over to their branch at Fusionopolis!

There was absolutely no way we could stomach two more pizzas by ourselves, so we decided to head back to office and share the pizza love with colleagues.

After all that atas pizzas we had earlier, Canadian Pizza didn’t seem as appealing. In fact, we even jested that this was the anti-climax of the day.

NOT. Canadian Pizza maybe more of a casual household brand, but their pizzas certainly pack a punch of their own!  For Canadian Pizza, we decided to go mainstream with a Hawaiian Classic, and something a bit more exotic with a Singapura Special. 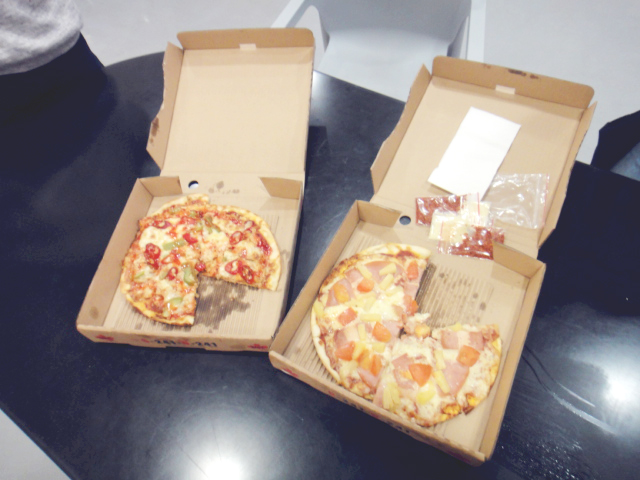 Pizza guy came in less than half an hour after we placed our order. Thumbs up for efficient delivery! 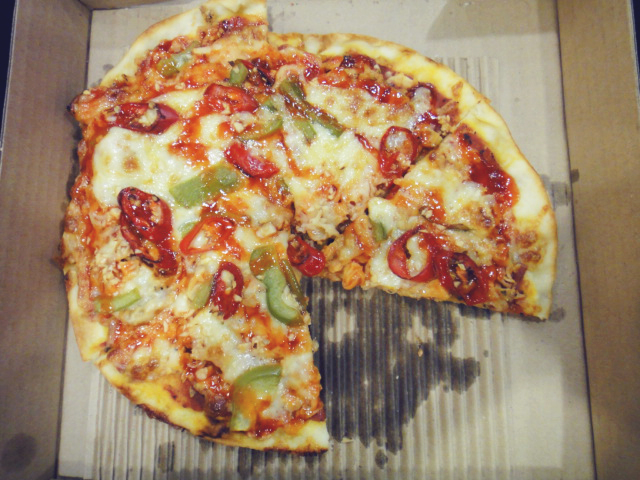 Despite the intimidating load of sliced chilli and peppers, the Singapura Special turned out be more spicy-sweet than fiery-burn-your-tongue-spicy. True to it’s messy okonomiyaki-esque look, this pizza is a mouthwatering potpourri for the senses. They could have been more generous with the cheese though! 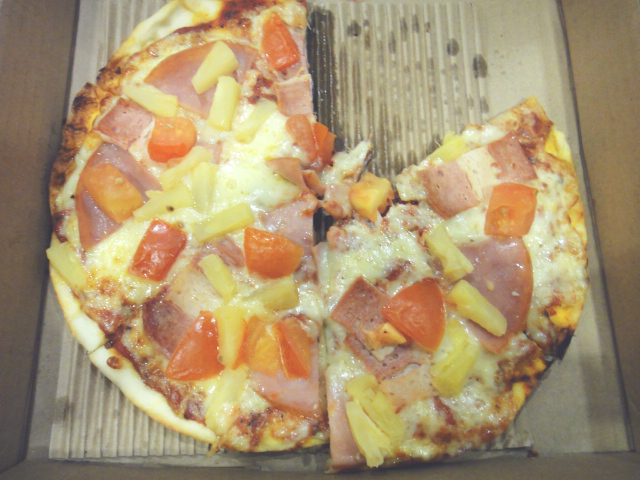 To be completely honest, the Hawaiian Classic appeared rather dull and unappetising. Nonetheless, it still tasted just as good as your average Hawaiian pizza. Curiously enough, Canadian’s version comes with diced tomatoes. Maybe it’s to compensate for the thin layer of tomato paste?

When it comes to value for money,  Canadian Pizza is king. Order one pizza from them and get another one free, without any strings attached always! Who’s complaining when there’s super-cheap and good pizza to be had? 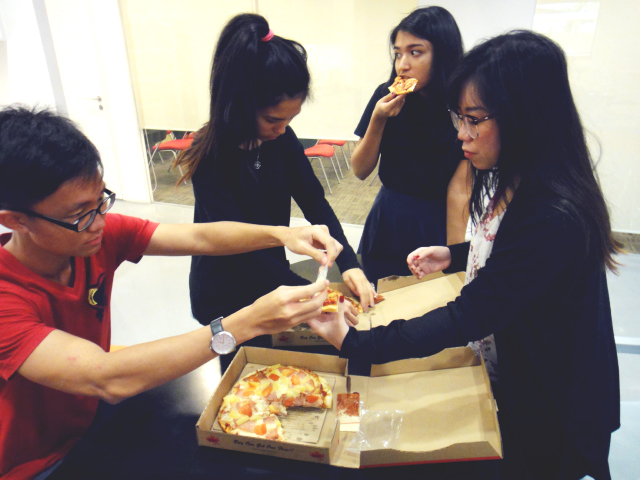 See what I  mean?

Address: Canadian Pizza can be found islandwide, but I’m sure most of us typically settle for deliveries instead of eating in.

Roasted duck pizza was an obvious choice, but since we wanted to try as many flavours as we could, we decided on a half-and-half, pairing roasted duck with smoked salmon. 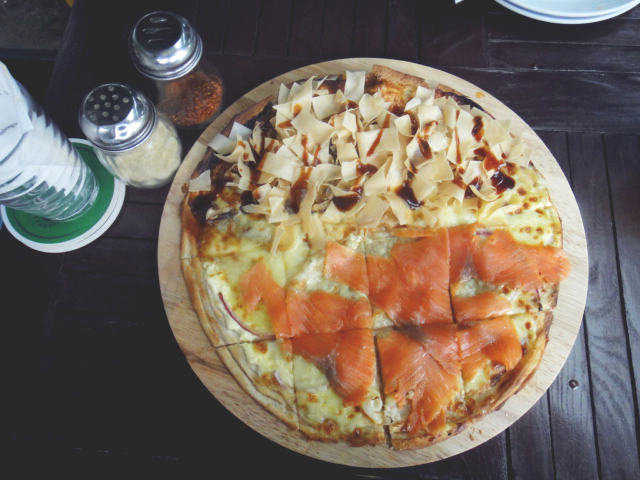 This was supposed to be the highlight of the day, and it was really unfortunate the pizza turned out to be quite the disappointment. 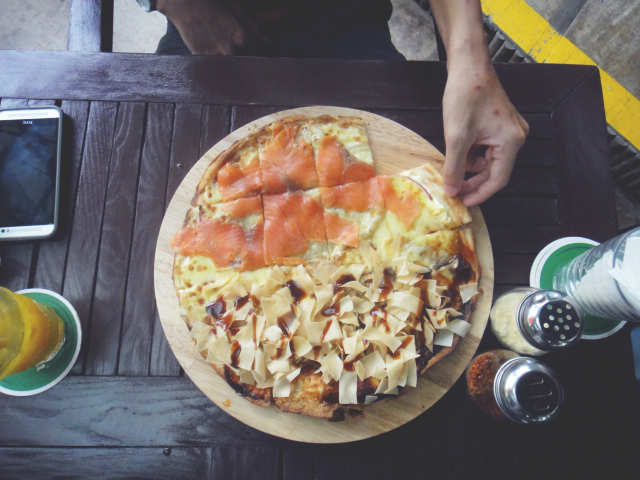 The smoked salmon had a really iffy smell and the pizza dough was rather raw in the centre. Thankfully, the roast duck pizza half was still top-notch, and tasted as great as we had expected.

For just $22, we got to chow down on Timbre’s signature roast duck pizza and smoked salmon pizza. While our experience leaves much to be desired, there is certainly no doubt that Timbre takes pride in producing some of the best pizzas in town. Just look at the evening queues snaking around the premises and you’ll get what I mean.

Opening hours: 4pm to 11pm from Mondays to Thursdays, 6pm to 1am on Fridays, 4pm to 12am  on Saturdays, closed on Sundays. 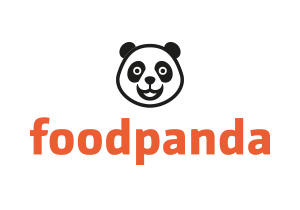 We had loads of fun traipsing around Singapore in search of the best pizzas in town, but getting from place to place while enduring the sweltering heat and jostling through the crowds was really tiring stuff. >o<

Don’t let the hunger pangs get to your head like us! With Foodpanda, you get to enjoy every single one of the pizzas we had, right in the comfort of your own home! Why waste time and energy scouring islandwide like a hungry ghost when Foodpanda delivers everything to you?

Click here to start chomping down on some pizzas now!

So what are you waiting for? Jio some friends, stock up on the alcohol, binge-watch some movies together and challenge yourself to your own insane pizza marathon with Foodpanda today!

Tian Wen is a 20-year old enjoying a second lease of life . He aspires to write and (hopefully) writes to inspire, and lives by the motto “to live is to write”. When he isn’t writing, you’ll probably catch him reading obscure tomes on philosophy and history; if not shouting and cussing like a madman on his PS3. Read his musings on just about everything under the sun at skyslate.wordpress.com.