While people don’t typically think of movies when they think of Singapore, there is certainly no shortage of great productions which are regularly exported from our sunny island nation, and if you’ve never watched a Singaporean production, then you’ve got at least two dozen movies to catch up on! Given our busy schedules, though, it would be impossible to watch all of them, so we’ve compiled a list of the most iconic local movies which you absolutely have to watch. Who can forget this remarkable social commentary of the issues with the Singaporean education system, cleverly disguised as a comedy which is at times tear-jerkingly hilarious, and at other times, just plain tear-jerking. While the movie tackled the broader themes of education, its criticism was leveled specifically at the negative stigma carried by the EM3 stream, and thus spoke more to EM3 students to a large extent, and EM2 students to a somewhat smaller extent.

Brilliant in its execution, I Not Stupid has a well-deserved place in the hearts of many a Singaporean kid, and for good reason.

Yet another gem by local director and resident funny man Jack Neo, Money No Enough was one of his earlier (though by no means his earliest) forays into the movie-making world. Like most of his other satires, Money No Enough addresses the prevailing societal concerns of the time – in this case, the sharp increase in consumer expenditure brought about by the rising level of affluence and increasing subscription of, and dependence on, credit cards.

I won’t spoil the plot, but suffice to say this is an incredibly sobering must-watch for all young working adults, as a cautionary tale of the dangers of spending beyond your means. Despite the fact that some of the jokes, and certainly the graphics, are a bit dated, Money No Enough still stands up well to the test of time. The first entry on this list that is neither a comedy nor is it directed by Jack Neo (though he does star in it!). Instead, this drama is directed by yet another local legend: Eric Khoo.  As a feather in Singapore’s cap, it was featured at the 1997 Cannes Film Festival, with the Ministry of Foreign Affairs famously declaring that the film was widely regarded to have contributed to the revitalisation of local cinema, and reflected a distinct Singaporean voice.

And for good reason! After all, the show is about the lives of several families who are all neighbours in the same HDB flat, and how their lives are both separate and distinct from each other, yet at the same time inextricably intertwined. An excellent portrayal of life in a HDB block, which has become symbolic of the life of the average Singaporean. Directed by Khoo Koh, One Leg kicking is a comedy about a team of soccer amateurs who, in the face of skepticism from friends and family alike, enter a soccer competition in the hope of reigniting the love of the sport which years of toiling at their miserable jobs had eroded away. It is especially poignant because many a grown Singaporean adult are able to identify with the protagonists, whose skeptical friends and family parrot the popular sentiment of the harshly pragmatic Singaporean society that sports cannot put food on the table.

Definitely worth a watch, even for those who have never considered a career in sports, because the show’s themes transcend just sports, and speak of abandoned childhood dreams and lost passion. Directed by Kelvin Tong and featuring a star-studded cast, It’s a Great, Great World revolves around the heyday of Singapore’s most well-known amusement park, Great World, more commonly known to locals by its Hokkien name, “Tua Seh Kai”, before it was closed down in 1978.

Incredibly authentic in its depiction of Singapore at the time, from the fashion to the language used, It’s a Great, Great World was popular among both mature audiences, as well as, somewhat surprisingly, to younger audiences, possibly because it served as a window for the latter into the lives and times of the former, while the movie no doubt served up ladles full of nostalgia for those who were old enough to actually have been to Tua Seh Kai. Definitely a must-watch. Adapted from Adrian Tan’s bestselling 1988 novel of the same name, director Phillip Lim’s The Teenage Textbook Movie is a lighthearted comedy-drama revolving around the lives of four Junior College students, and helped to kick-start the acting career of several of the stars, and had the distinction of being the first English Singaporean movie with an all-Singaporean soundtrack.

While some of the references may be slightly dated, the struggles the four stars go through as they navigate the murky waters that is teenage love will be both endearing, as well as immediately familiar, to teenagers the world over, regardless of the era in which you spent your teenage years.

Directed by Colin Goh, who was also the founder of satirical site TalkingCock.com, Talking Cock the Movie is actually a collection of short stories which showcase different aspects of life in Singapore. The film will almost certainly leave you with tears of joy as you laugh your way through each story, which is imbued with an unmistakably Singaporean spirit.

Irreverent yet totally relevant and relatable for the average Singaporean. Be sure to check out the website, while you’re at it. While it is no longer being updated, it still has been carefully maintained and preserved, so you can still plough through past articles and forum discussions for some satirical humour. Of course, no list of iconic Singaporean movies is complete without Royston Tan’s tragic drama, which very much revolves around the getai scene in Singapore. Without giving too much away, the tragedy strikes fairly early in the film, and Royston Tan does a great job of really drawing you in and making you feel for the characters.

Fret not, though! All’s well that ends well, and 881 will not only leave you with some valuable life lessons, it will enrich your knowledge of catchy getai songs which you can use to impress your grandparents at the next Chinese New Year. 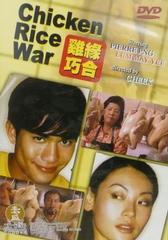 What happens when you put two rival chicken rice stalls next to each other and have the children of the respective families manning the stall fall in love? You get Singapore’s very own version of Romeo and Juliet. A tongue-in-cheek localisation of Shakespeare’s immortal tale of star-crossed lovers, director Chee Kong Cheah does a fantastic job of setting the story in contemporary Singapore, while injecting a healthy dose of humour into it for good measure.

Equal parts humour and social commentary, Chicken Rice War serves up a laugh a minute, while taking humorous jabs at some social conventions.

While there are literally dozens of Singaporean movies out there, almost all of which are fantastic in their own rights, these are our 9 iconic, must-watch Singaporean movies that characterise and define life in Singapore, and which will resonate with everyone, regardless of which walk of life you come from. What do you guys think? Let us know!

Also, if reading a book is more your thing, be sure to visit ShopBack to get the best offers like a Book Depository coupon and to also enjoy Cashback on top of that!

Unless otherwise stated, all images were taken from Wikipedia.