Home > Travel > Tips To Fly With Babies and Young Kids From Real Parents (And How To Avoid Them)
Others, Travel 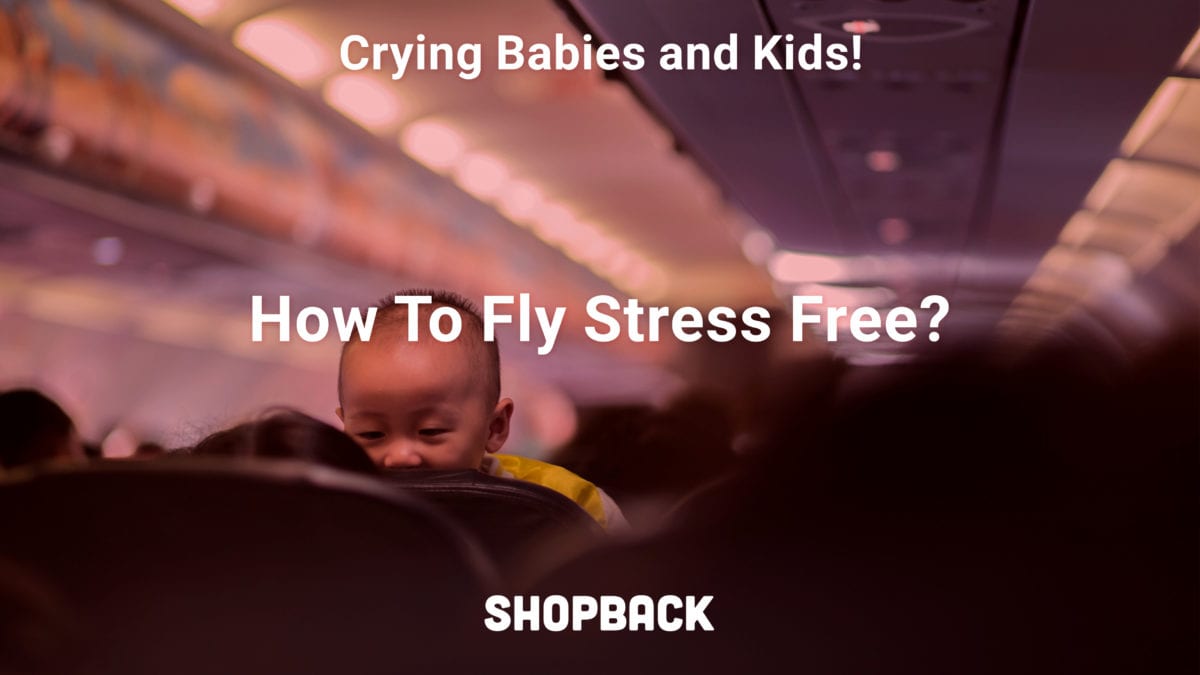 When you’re a new parent, flying with your baby or toddler can be stressful. You’re not sure how you can keep an energetic two-year-old entertained. You don’t know what you can bring with you on the plane along with your baby.

I’m not too sure either. I’m not a parent, and I’m honestly afraid of crying kids, especially on a long flight.

But I have friends and family who frequently fly with their children, who have built their lives around living in one city and visiting their home in another place.

So I’ve asked 6 of these parents (and an ex-cabin crew) for their tips so you won’t be flailing with a crying baby in the airplane ever again.

Follow us on our Telegram channel for the latest blog posts and cashback deals.

Packing List to Bring on Flights With Young Children / Babies

Use this packing list to decide what to bring with you on a flight.

You can also check Changi Airport’s Special Attendance to see what is provided at the airport.

Jay, Mother of a Nine-Month-Old: It depends on your baby’s sleep cycle. Morning flights are good because other people won’t be sleeping in case your baby cries.

Alan, Father of a Two-Year-Old: Fly at night so your kid can sleep. I don’t normally take flights in the day.

Natalie, ex-cabin crew: It depends on the baby but you can take an afternoon flight if you don’t want to disturb other passengers. Most of them will be watching movies at that time.

Alan, Father of a Two-Year-Old: Get a seat with extra leg space in the front. The extra leg space can help with your kid’s restlessness. The bassinet can be requested free of charge for babies.

Yvonne, Mother of Three Young Children: One time when my oldest was young, he kept kicking the front seat so the guy kept asking me to stop him. Front seats can help if your kid is hyperactive.

Rachel, Mother of Two Boys: Seating is super important. Pay a little extra for front seats. You can have a little more space to cradle/soothe the baby without getting stuck in the middle of the plane while the food cart is along the passageway.

Natalie, ex-cabin crew: The free seat for children under the age of 2 is usually your lap. For older children, you have to purchase a ticket for them. You won’t be seated at exit row. The airline will try to put you at a seat with a bassinet.

Natalie, ex-cabin crew: Check with the airline you’re flying on what you can bring. You can call their service hotline.

Most parents bring milk powder with them. Just follow the standard guidelines and don’t bring any prohibited items (like lighters, compressed gases, or even toy guys).

Natalie, ex-cabin crew: Timing is a big difference. If you fly to KL, it’s a 1-hour flight. You would need to be more prepared on a longer flight as compared to that flight.

Yvonne, Mother of Three Young Children: Baby snacks and toys. Toys that have music aren’t too loud if it’s not for a night flight. If your child is still a baby, toys aren’t going to be useful. Bring your pacifier and milk.

Rachel, Mother of Two Boys: For toddlers travelling on budget flights, prepare their entertainment in — download pre-downloaded videos on your phone / iPad and/or bring an activity pack (stickers, washable crayons and markers) to engage them during the flight.

Alan, Father of a Two-Year-Old:  Bring colouring books, toys, and extra diapers. Use cotton to cover your baby’s ears because they might be sensitive to air pressure.

*Note: earplugs for babies and children (like EarPlanes, as recommended by a friend who used to have blocked ears from flying since he was little) can work too.

What Kind of Food Can I Bring on Board and Can I Ask To Warm Them?

Dan, Father of a One-Year-Old: Prepare food beforehand. Tell the staff that it’s baby food so you can bring it onboard.

Natalie, ex-cabin crew: You can ask to warm the baby food on board. Make sure it’s in a microwaveable container. Airplanes have limited fridge space so it might be difficult to store, for example, breast milk. But the crew will try to accommodate you.

Note: In some airlines, you can’t warm or chill your personal food items due to hygiene reasons. In that case, ask for a container with hot water to warm your food, or keep your expressed milk or other items in a cooler bag or a vacuum flask.

Dan, Father of a One-Year-Old: Don’t check in your stroller. Tell the staff you’ll be using it inside the airport and hand it over to the staff before boarding the plane. You’ll get it back with the rest of your luggage after your flight.

Yvonne, Mother of Three Young Children: Use a baby carrier to wear your baby. There was a guy with 3 kids too who helped me bring the boys to the toilet when I was baby wearing my youngest. People are quite helpful when they see I’m handling two to three kids alone.

Rachel, Mother of Two Boys: If you have kids of various ages, encourage the older ones to watch out for their younger siblings.

Natalie, ex-cabin crew: At the check-in counter, depending on the airline, they could send a personnel to assist you. On the plane, the crew will also try to help as much as they can. As much as possible, it’s easier for you to travel with someone else who can help take care of your children.

Eric, Father of a Nine Month Old: Feed the baby before the flight. Then your baby can sleep during the flight.

Rachel: For babies, some mothers who are nursing infants told me they latch (i.e. breastfeed) their babies during takeoff to soothe them.

Alan, Father of a Two-Year-Old: (Note: This is for those of you who are looking to avoid a crying baby.) Some people request to change seats. Sometimes, talking to strangers can help to keep the baby entertained.

When there’s an emergency, the cabin attendant will provide first aid.

If it’s serious, there will be a doctor’s call. The chief of the flight will make an in flight announcement, asking if there’s any doctor on the plane. In the case of a serious medical emergency, there may also be an emergency landing in another airport.

If there’s an emergency that requires landing on water, the only thing you need to do is leave your baggages behind, follow instructions.

Make sure to keep your shoes on during take off and landing so it’s easier to go.

The Secret To Having A Stress Free Flight With Kids

Flights can’t all be as fun as an amusement ride. Even in an amusement park, there are screaming children. It’s just a little more socially acceptable to be screaming there.

As much as parents try all methods (as you’ve read above) to keep their children entertained and quiet, sometimes kids get cranky.

When asked if anyone gets annoyed, Yvonne puts it a little bluntly: “It’s a toddler or baby leh, what you expect. If you want silence, then buy first class.”

“But until now,” she also tells me, “Everyone has been quite helpful.”

But Really, How Can I Avoid Crying Babies As A Fellow Passenger?

Read More: My Flight Got Delayed/Cancelled! How Do I Get Compensation?

I make difficult concepts easy to understand so you can make smarter decisions.