Flower-viewing or hanami as the Japanese call it, is the viewing of the cherry blossom flowers which happens over a tight window annually – usually between the end of March till early April. The blooming of the cherry blossom flowers holds more significance than just the appeasing veil of pink petals the sakura trees over the nation, but it is also the welcoming of a brand new start to the Japanese. A national identity that has gone viral, over a million tourists flock to Japan from all over the globe just to witness these flowers in its full glory. No matter your trip to the Land of the Rising Sun is for this particular reason or not, Booking.com prepared a running list of stunning places to hanami this coming end March.

Stroll along the cobblestones that pave the path beside a gentle stream of the river. Shadowing the canal are rows after rows of sakura trees, and an endless stretch of restaurants, cafes, and shops all lined up along the whole 2km of the path. Expect a flamboyance of pink towards the end of March, when the sakura trees go full bloom and decorate the Philosopher’s Path in dazzling petals of pink.

Tokyo, the heart of the ultra-forwarded nation of technology poses itself as one of the impassable pitstops in Japan. Conveniently located in the midst of this metropolis is Shinjuku Gyoen, a park nestled amongst the hustle and bustle of the city. Interesting fact about the Shinjuku Gyoen: there is a mix of late and early blooming trees in this particular park, which means that the sakura season in this place lasts longer than most places! If your schedule is tight and can’t make it to the beginning or the full bloom of the park, you might wanna pop by the Shinjuku Gyoen while touring the city.

Widely recognized as the top landscape garden in Japan, the Kenrokuen Garden hosts an array of flowering trees, giving it a new lease of look all year round. As one of the most prominent parks in Japan known for its grandeur and sheer size, Kenrokuen Garden is one of the best spots in Japan to view the blooming of cherry blossom trees. The park is not all floral and fauna, for an abundant of teahouses accompanies the cherry blossom trees-lined pedestrian way. The warmth of hot tea to wash over the cool spring breeze while the petals of cherry blossom fall from the stars, name an experience more Japanese than this, I’ll wait! 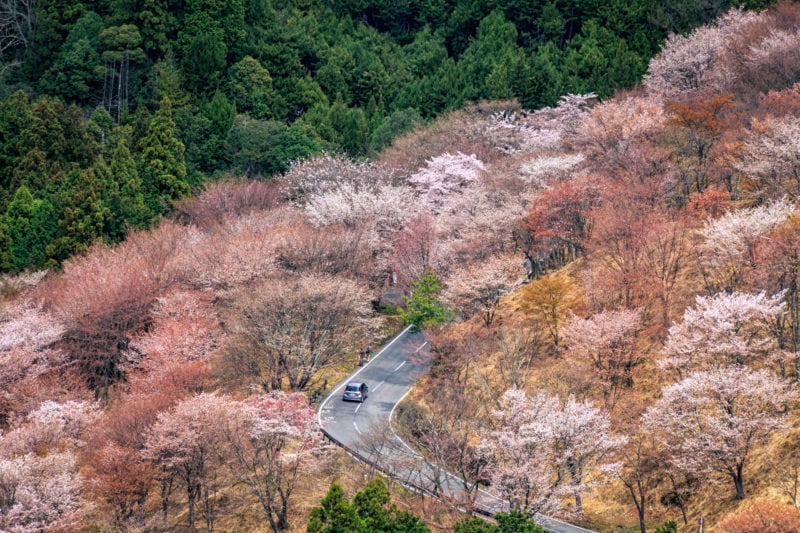 The town of Nara is peppered with spots to witness the blooming of the cherry blossom. Viewing the field of bloomed cherry blossom trees on top of Mt. Yoshino is something of another level, literally. How often do you see a whole spectrum of pink anywhere? From the pastel soft pink hues of a cherry blossom tree to one with full bloomed petals pink, within the Nara Prefecture, there are vantage points where travellers could be at the ridges of the mountain to view the seemingly sea of pink right beneath their feet.

Maizuru Park is a must-visit all year round, be struck in awe with what’s left of the Fukuoka Castle. Having been around since the 17th century, it used to be the largest castle in the Kyushu region. Though what’s left of the castle is now just ruined walls, turrets, and gates, it still proves to be a good observatory for its surrounding, including the snaking paths lined with sakura trees.

If you’re arriving in Japan later than the stipulated cherry blossom season, fret not. Takayama is a great place for hanami too, except it blooms later than areas like Kyoto and Tokyo. One commonly known spot to hanami in Takayama is the Miyagawa Ryokuchi Park. A huge lawn in the middle of this park serves as a conducive and airy space for your recreational activities, pack a lunch or even carry out a ball sport in full spectacular view of these sakura trees during spring.

The cherry blossom season is now. Don’t miss it!

Even the offshore island of Okinawa has its own cherry blossom season which happens in January, much earlier compared to the rest of the country. Towards the northern side where the climate is much cooler, you can expect blooming to take place later in cities like Sapporo and Aomori, up till the end of April! – fear not if you can’t visit the rest of Japan in March, find your next flight out to the rest of Japan with Booking.com today! Shop through ShopBack and get even high discounts and cashback for your trips.