Home > Travel > Travel To Africa: Black Panther Filming Locations That Are as Good as Wakanda
Others, Travel

Travel To Africa: Black Panther Filming Locations That Are as Good as Wakanda 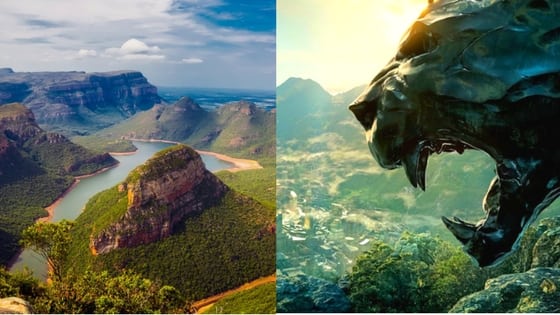 Whether you are an avid Marvel fan or not, the likelihood of you seeing or having seen the new Black Panther is 99.9%. The superhero movie has been smashing records since its very first release. Alongside the high-quality cinematic effects, well-written plot, and norm-shaking message, the location shots are simply phenomenal.

But before you pack for Wakanda, here’s the harsh truth: It ain’t a real place. How we all wish it was, don’t we? Despite this, the filming locations and aerial shots included in the movie were as real as can be. And, Africa, with it’s out of this world sunsets and sunrises, is a bucket-list worthy destination.

So, how about we awaken the wanderer in you instead and go through a list of must-see countries off the comic book film? Our partners Expedia, Booking.com, Agoda and Klook, are just a few clicks away, after all.

One can spot plenty of haunting wonders in South Africa. The place boasts enchantingly beautiful deserts with out-of-this-world sky transformations at dawn and before dusk.

Savannas are homes to many wildlife creatures that live only in the Dark Continent.

Despite being known for its abundant barren and grasslands, South Africa is also gifted with water wonders like coral reefs, sharks, beaches (next to desert land!), gushing rivers, and disarming waterfalls. In fact, there are thrill watersports you can try when you visit — rafting, bungee jumping on top of the gushing water, surfing, and kayaking.

If you’re looking for some Wakanda-like enthrallment, Cape Town’s multicultural city in the middle of mountain ranges and the sea can be close. You can go sight-seeing at the Kirstenbosch National Botanical Gardens nestled at the eastern foot of Table Mountain.

An endless escape to the wilderness is Zambia. There are vast lakes, rich rivers, wildlife, national parks, small towns, historic spots, and waterfalls.

The escape to the wilderness also welcomes a lot of opportunities for adventure. There are elephant trails.

You can go bungee jumping.

You can do hydrospeeding on the Zambezi River.

Or, you can do water rafting.

And, there’s a lot more including a visit to Victoria Falls, the largest waterfalls in the world.

If you’re brave enough, you can try swimming or diving into the Victoria Falls’ Devil’s Pool — Mother Nature’s own version of infinity pool ]– which also might give you the feels of the setting where T’Challa was crowned King of Wakanda.

Uganda is the third place in Africa whose aerial shots were included in Black Panther (the other two being Zambia and South Africa which were previously mentioned). The particular areas that aired were the Bwindi Impenetrable National Park and the Rwenzori Mountain Range.

The Rwenzori Mountains (also known as Mountains of the Moon) is the third highest peak in Africa. Its peaks are permanently capped with snow, and its glaciers serve the Nile River (the longest river in the world). Activities you can enjoy here include mountain climbing, hiking, bird watching, and cultural immersion.

The Impenetrable Forest of Bwindi holds a name that’s tempting to anyone in search of an escapade. It is home to a thick jungle that is considered to be on of the world’s most ancient habitats. The popular highlight here is gorilla trekking in which you walk into the forest (with a local guide and legal permit) to see or meet mountain gorillas.

Now, we move on to the actual locations where Black Panther was shot apart from those that were filmed in a studio or makeshift sites in Atlanta, Georgia.

This was pretty obvious. A big action stunt in the movie happened along Gwangandaegyo Bridge, the longest one in South Korea. Remember the car chase scene wherein T’Challa did an acrobatic backflip and stopped the bad guys’ car?

The bridge is most scenic at night when its entirety is lit up and it glitters on the nearby Gwangalli Beach.

Also part of the epic car chase was Jagalchi Fish Market in Busan. It is a popular tourist attraction being the largest seafood market in the country. If you’re looking to taste local Korean goodness, you can head here for fresh raw and dried seafood. The best time to visit is around October when the annual Autumn Festival is held.

The most memorable scenes were probably the rituals on the waterfalls — when T’Challa was crowned king and when that crown was momentarily taken away from him by Erik Killmonger. The falls in those scenes were not CGI-ed. The falls is a true to life earth wonder in Argentina, the Iguazu Falls. It falls to the Iguazu River, and together, they form the world’s largest waterfall system. The falls alone is made up of many falls lining up next to one another and bordering between Argentina and Brazil altogether.

There is a walkway where tourists can get a close view of Iguazu and have the miraculous experience of being in two places at the same time.

Visit all the Wakanda-like destinations

So, we guess, you’re now almost set to pack for your own Wakanda-like wonderland. To visit them all you need to plan an all-around the world trip. Let us know where you would go first in the comments below!