Home > Tech Reviews > Acer Swift 5 – The Modern and Lightweight Laptop for the Working On The Go
Tech, Tech Reviews 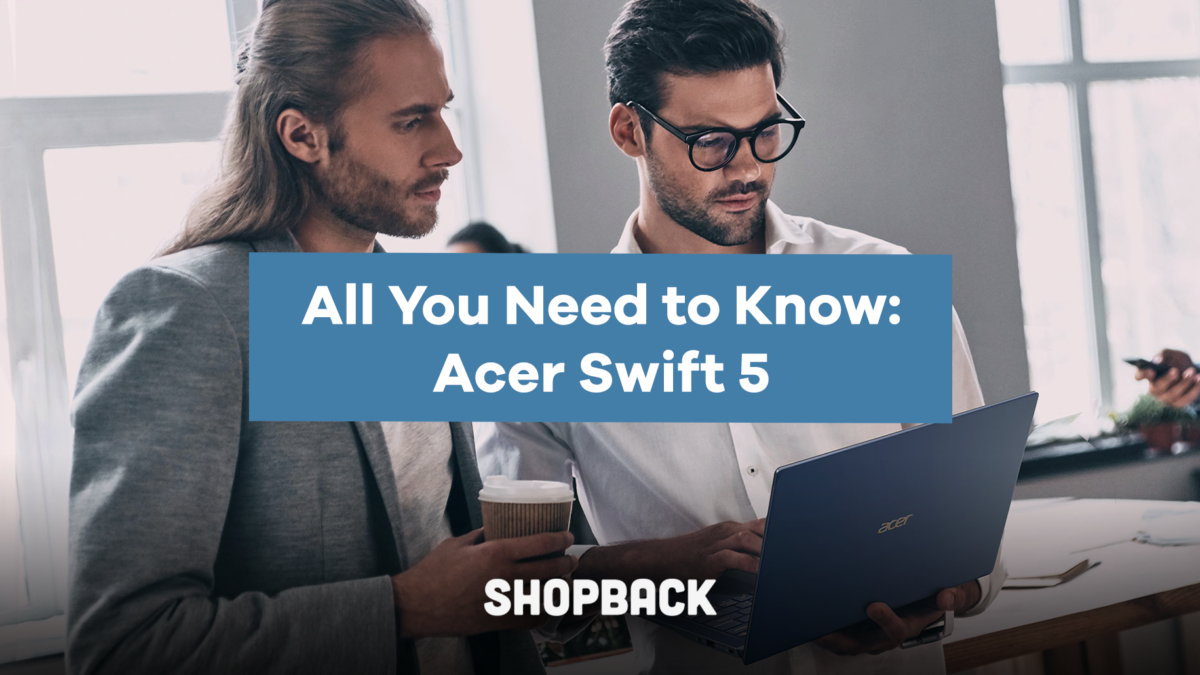 In delivering a laptop for working professionals who are always on the move, Acer has bestowed us with the Acer Swift 5. A sleek and portable lightweight laptop that doesn’t compromise on its performance, the Swift 5 is also reasonably priced for its top-notch abilities. The ultra-slim laptop makes you feel like you’re carrying a thin paper file, rather than a laptop. Now let’s dive into the Swift 5’s technical specifications.

Exactly, how light and thin?

Although the Acer Swift 5 is thin and light, it remains a solid piece of work with magnesium-lithium and magnesium-aluminium metal chassis. This chassis ensures the frame of the laptop remains strong under stress and force while keeping it lightweight. It weighs in at only 990g, and for a simple comparison, a 1-litre jug of water weighs in at 1kg.

You can conveniently tuck the 14.95mm thin Acer Swift 5 into your bag without a second thought. Many other ‘light-version’ laptops from other brands are not able to compete with the Acer Swift 5 on this front. This is especially so with the scarcity of connectivity ports for thinner laptops. We’ll get into the Swift 5’s connectivity ports later on.

The Acer Swift 5 laptop features a 14-inch IPS (in-plane switching) display which provides vibrant colours and clear viewing angles of the screen. Not only is the screen in full HD (1920×1080 resolution), but it also occupies a high screen-to-body ratio of 86.4%. I have to say, this gives the Swift 5 a super modern and professional look that is unlike clunky-looking laptops of the past.

The display brightness also goes up to 300 nits which is commendable for a laptop of its width. You will not have any trouble watching your videos, well unless you watch a really dark film outdoors when the sun is shining in its full glory. The colours are exceptionally vivid and vibrant – making it particularly useful for the designers and video editors out there.

Graphics on the Swift 5 are also powered by the NVIDIA® GeForce® MX250 which provides faster performance for integrated graphics on graphics-intensive applications like Adobe Premiere Pro.

This tiny but mighty laptop is powered by an Intel Core i5-1035G1 chipset which is a fairly new mid-range chipset from Intel. The chipset will allow you to complete intensive work tasks with no hiccups and is also accompanied by 8GB RAM. While the Swift 5 doesn’t outperform every single laptop in this category, it still packs quite the punch and is one of top 3 in its field.

The Swift 5 also comes equipped with 256GB worth of storage. This is more than enough for professionals who need to use Adobe Creative Suite and Microsoft Office. Alternatively, you can also use external storage drives or online storage options to free up storage space on your laptop.

A portable laptop with poor battery performance is a contradiction itself. When you’re hotdesking or freelancing in a café, power plugs are a scarcity and a dead battery could prematurely halt your productive work session – and you’ll even risk losing your progress. As such, the 12.5 hours of battery life on the Swift 5 comes as an impressive feat for a laptop its size. What’s even more impressive? You’ll get almost 4.5 hours of work time in a 30-minute charge. Impressive, to say the least.

Now to a component I personally look out for, the Swift 5 is equipped with a USB 3.0, a USB-C port, a Thunderbolt 3 port and an HDMI display port. This is quite the feat considering its ultra-slim frame and is way ahead of its competitors in this particular field. The latter two ports are also a rarity on ultra-slim laptops, so we say you go for the Swift 5 if connectivity is a key deciding factor for you.

Nothing too fancy for the keyboard on the Swift 5, but it gets the job done. For the tough typers, the keyboard here will be loving those taps. One thing to note, due to its small frame, some keys on the sides (e.g. Page Up and Page Down keys) are crammed in which might be a little inconvenient for you.

We do like the backlit aspect of the keyboard which will allow you to work in dim environments with no issues too.

On first sound, the audio hits a little odd. And that’s when we realised that the pair of stereo speakers are actually installed beneath the laptop. And while this projects the audio downwards, which makes the audio a little muffled, the sound is not heavily compromised and sound quality is all but hampered.

Quintessential in laptops now, a fingerprint scanner is located below the keyboard at the bottom right corner. It does what it needs to without over jarring the aesthetics aspects of the Swift 5.

Possibly the Best Companion for Professionals.

Overall, the Acer Swift 5 performs well on many fronts, especially if you need to get work done on the go. It is light, slim and efficient in its functions. For its price point and capabilities, this is a solid laptop that is definitely worth the investment. With the thin bezels and crazy lightweight feature, it’s one of the best in the markets right now.

Aiman is a huge fan of Dad Jokes. Here's one: In a boomerang shop: "I'd like to buy a new boomerang please. Also, can you tell me how to throw the old one away?"

How to Design Your Living Room On A Budget

5 ASOS Hacks To Save Your Wallet

6839
Health and Beauty, Home and Living